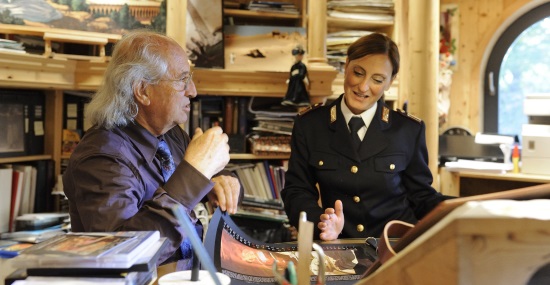 An "art calendar" created from the encounter between the Polizia di Stato and Vittorio Storaro, one of the greatest cinematographers in the world, and the winner of three Academy Awards. The 2015 calendar of the Polizia di Stato, which is currently being completed, is centred around the theme "arts and abilities" and is expected to acquire cult status.

The Police wish their calendars to become collector's items that people do not throw away at the end of the year, but keep in their homes. The first "art calendar", conceived by Vittorio Storaro, will be issued in 2015.

The great cinematographer started from the concept of "arts", intended not only in the literal sense, but also in the Latin meaning of the word, that is, "skills". So, for each month he created an image combining arts, such as sculpture, poetry, history, literature, philosophy, and photography, with the skills and abilities of the police.

The 2015 calendar of the Polizia di Stato will be available in two formats: the wall calendar at a price of 8 euros, and the desk calendar at price of 6 euros.

It can be booked by Saturday, September 20, 2014 at the Public Relations Office of your Police Headquarters (Questura), by showing a payment receipt on the postal account no. 745000, in favour of "Unicef Comitato Italiano". The reason for payment should state "Calendario della Polizia di Stato 2015 per il progetto "Repubblica Centro Africana - nutrizione per i bambini vittime dell'emergenza umanitaria" (2015 National Police calendar for the project "Central African Republic - nutrition for children who are victims of the humanitarian crisis").

Once again the calendar of the Polizia di Stato will support less fortunate children through a long-established partnership with Unicef. The proceeds from the 2015 calendar will fund the project "Central African Republic - nutrition for children who are the victims of the humanitarian crisis" , which is aimed at providing supplies of therapeutic food and treatment, promoting and supporting optimal infant and young child feeding practices and breastfeeding.