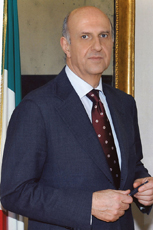 Born in Eboli in the province of Salerno, on 9 June 1951, married with two children.

Graduated in Law from the University of Naples, he joined the National Police in 1975 and served in Calabria fighting organised crime and terrorism. In 1982 he moved to Rome, where he continued to investigate drug trafficking and organised crime at both national and international level.

He also specialised in the fight against economic crime and contributed to the establishment of the Central Operations Service, the top investigative structure of the National Police, of which he became the head in 1996. In this position he conducted major international successful investigations into transnational crime and Mafia-type organisations leading to significant operational results and the apprehension of dangerous fugitives.

Appointed Prefect in June 2000, he took office as Director of Traffic, Railway, Postal, Border and Immigration Police. On 11 July 2003 he was appointed Director of Immigration and Border Police. On 7 November 2005, the Council of Ministers appointed him Deputy Director General of Public Security and Criminal Police Director

On 4 January 2007 he was named Prefect of Naples. From 6 July to 31 December 2007 he also served as Government Commissioner for the waste crisis in the Campania region and from 31 May 2008 as Commissioner responsible for the emergency related to Roma settlements in the Campania region. On 30 August 2010 he took office as Head of the Department for Home and Territorial Affairs of the Interior Ministry.

On 31 May 2013 he was appointed Chief of the Italian Police by the Council of Ministers.