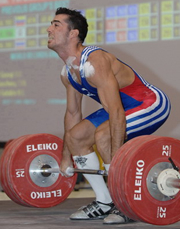 Weightlifting has ancient origins. It featured at the first modern Olympic Games in Athens in 1896 with the men's event, while women started to participate only at the 2000 Games in Sydney. It includes two events: snatch and clean and jerk.

Clean and jerk consists of two stages. The first stage, called the clean stage, is a lift where the barbell is picked from the floor and placed on the shoulders in one motion. After a pause, the athlete goes to the second stage of the motion. In this second stage, the athlete lifts the barbell into an overhead position while placing the legs in a split or lunge position. When the athlete is completely still in the final position, the referee gives the signal to drop the weight back to the floor.

The snatch is an overhead lift consisting of lifting the barbell from the floor in one motion. The lift is valid if the athlete is able to hold the bar still above his head, with arms and legs extended, until the referee gives a down signal.