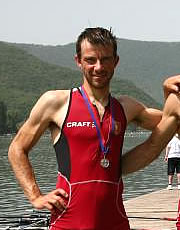 Jiri was born on May 27, 1978, at Mladá Boleslav (Czech Republic), 40 km away from Prague. At the age of 11 he followed his parents who fled the communist regime in the former Czechoslovakiain search for a better future. After a couple of years in Milan, they settled in Borgomanero, near Novara, on Lake Orta. He started rowing aged 14, having previously played football. One of his neighbors, who used to practice rowing, encouraged him to try this sport and since then he has no longer left his boat. In 1993 he joined the Lake Orta rowing club and in 1999 he won the Italian title in the men's double. Prior to 2004, when he obtained the Italian citizenship, he competed with the Czech national team, and narrowly missed out on qualifying for the Athens 2004 Olympic Games.

His career took off in 2005, when he joined the Gavirate club. Under the technical coaching of Giovanni Calabrese, Jirka grew physically and technically and won his first world title in the lightweight men's eight, and the Italian championships. In 2006 he won again the gold medal at the World Championships in the same boat class. The next year he secured a fine bronzemedal in the lightweight men's coxless four, and won the gold at the European Championships in Poznam (Poland), where his crew took the only rowing medal for Italy. In 2008 he took part in the Beijing Olympics and finished seventh.