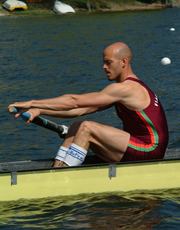 Rowing is a sport in which athletes race on natural or artificial basins, along a racecourse divided into lanes. The long and narrow racing boats are made of kevlar, carbon fibre and composite material, which make them light and stiff. The different types of boats are classified according to the number of rowers (from 1 to 8), who can have one oar held in both hands (sweep stroke) or two oars (sculling stroke). In addition, they can have a coxswain (aka cox) or be coxless, that is they can be "coxed" or "straight".

All sweep-oar boats have a rudder. In coxless boats the rudder is controlled by the steersman's foot.

Sculls, however, have no steering mechanism. Scullers keep the boat moving straight applying pressure on one side or the other. Racing boats can be, for example, a coxed pair (with cox) and a coxless four (without cox). Rowers use a sliding seat, which enables them to use their legs to apply more pressure on the oars.

Typically rowing competitions are held over a straight course of 2000 m, but there are also shorter distance races covering 500 m and 1000 m. It is an all-round sport which exercises all muscles and provides an excellent cardiovascular and respiratory workout.

Rowing races were held already in ancient Greece, even though regattas were not in the programme of ancient Olympic games, as the act of rowing was considered a menial task. In more recent times it made a comeback and became an Olympic sport already in the second edition of modern games held Paris in 1900.