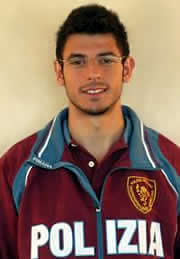 Daniele Greco had his first approach to athletics when he was in his eight grade, and participated in the provincial phase of the student games, running the 80m hurdles race. He was noted by Professor Raimondo Orsini, who introduced him to this sport.

Daniele was called up for a cadet competition by the provincial committee, thus gaining a place in the regional team and competed in the national finals. In 2004 he won the cadet national competition in Abano Terme jumping 14.14m, the fifth best performance of all time for athletes under 15.

His first international success came at the Gymnasiade 2006 in Athens where he finished third. In 2008 he joined the Fiamme Oro sports group and started doing well in international competitions obtaining excellent results: fourth place at the World Championships in Bydgoszcz (Poland) and first at the Mediterranean Cup in Rabat, setting the championship record and the best Italian performance in the category with a jump of 16.41m.

Daniele was the Italian junior record holder with 16.12m, and the national champion in the "promesse indoor" (promising athletes indoor) category in 2009 and 2010 in 60m race and triple jump event. In 2009 he won the European U23 Champioships jumping 17.20m, which not only was the best Italian performance in his category, but also the world U23 best performance.

He is the current indoor Italian record holder in the triple jump, with 17.24 m.

Daniele has qualified for the London 2012 Olympic Games.