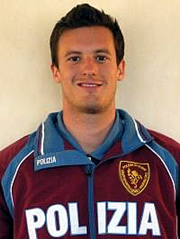 Emanuele Abate made his debut in athletics in 2002 taking part in a student competition with the Cus Genoa club. On that occasion he showed a considerable aptitude for sprint events, especially sprint hurdling.

In 2006 he participated in the Geneva meeting, running a time of 13"59, which made him one of the top hurdlers in the country and a member of the Italian team at the European Championships in Göteborg (Sweden).

In 2007 he joined the Fiamme Oro and won the bronze medal in the 110m hurdles event at the European Athletics U23 Championships in Debrecen (Hungary). Then he went on winning the Italian title in this discipline. Later that year he finished fourth in the 110 m hurdles final at the Bangkok World University Games (Thailand), and third at the 2009 World University Games in Beograd (Serbia).

In 2011 Emanuele was both indoor and outdoor Italian champion, running his personal best in the 60 m hurdles and 110 m hurdles. That same year he participated in the indoor European Championships.

He finished fifth outdoor at the World University Games in Shenzhen (China), and narrowly failed to make it into the semi-finals at the IAAF World Championships in Daegu (South Korea).

On February 4, 2012 he ran the 60-meter hurdles in a national-record time of 7"57 in Magglingen (Switzerland), achieving the qualification for the World Indoor Championships in Istanbul (Turkey). On June 8, 2012 he also set the national record in the 110 m hurdles, finishing in 13"28.

He was selected to represent Team Italy at the London 2012 Olympic Games, where he ran an excellent 13.35s in his qualifying heat, missing the final by 4 hundredths of a second only.