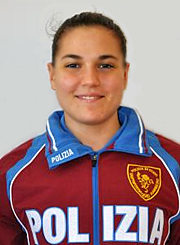 Her international career started in 2006 with a 6th place in the 5 km open water event at the European Swimming Championships in Budapest. The following year Martina appeared at the World Championships in Melbourne, Australia, where she finished 6th in the same event.

In 2008 she seized her first important medal, getting a silver in the 10 km women's open water marathon at the European Championships in Dubrovnik, narrowly missing the bronze medal in the 25 km event.

Martina appeared at the 2008 Beijing Olympics, where she finished only 10th , but at the Rome World Championships in 2009 she won the bronze medal in the 10 km open water event.

In London she was among the leading contenders in the fight for an Olympic medal. In fact, she won a fine bronze medal after a very hard race, the only swimming medal for Italy in the 2012 Olympic Games.

In 2013, she won the world championships in Barcelona in the 25 km event.