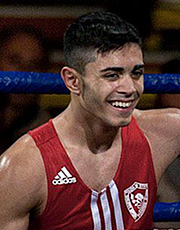 Manuel Fabrizio Cappai will be the youngest boxer ever to defend the colours of Italy in an Olympic tournament, following his father's Fabrizio advice, who was a former pro Italian champion in the featherweight class.

He started fighting on January 31, 2009, and in three years he has shown all his talent, improving match after match and earning a place in the national team. According to his father, his technical qualities can be summarized as follows: "Manuel knows how to read the match cleverly and in the boxing ring he manages to be cold and resolute."

At the AIBAEuropeanOlympic Qualification Tournamentheld in Trabzon, Turkey, Manuel gained an Olympic berth in the London edition , beating skilled boxers such as the Armenian Soghomonian and the Polish Maszczy.

Despite the fact that he is only 19 years old, he knows what he wants very well: "I have entered the Olympic world, which means that now I must confront the best boxers in my weight class. But this does not scare me, though it motivates me much more. I'll do my best not to come back empty-handed and disappoint my team that believes in me."