How to spot fake banknotes and coins 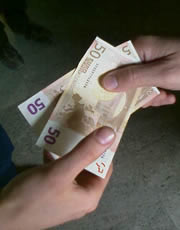 Euro, the single currency which can be used in 16 Eu countries (the so-called Euro zone), has been circulating since 1 January 2002.

Ever since that date, forgers have been trying hard to fake the new banknotes.

Forgery does not involve banknotes only, but also coins. To make it hard to fakethem, banknotes bear embossed lettering printed on their edges. The 1- and 2-euro coinsare produced using sophisticated bi-metal technology.

To check whether a banknote is genuine, the best thing to do is to compare a genuine and a fake one.

Observe the size, clearness and vividness of colours, as well as the beauty of printing, the light and shade effects and the depth of images produced using sophisticated technologies, which make the banknotes difficult to counterfeit.

Besides these more common details, some security features have been incorporated into the new currency.

The 16 EU countries which have adopted the euro currency as their sole legal tender: